If you’re an extreme gamer or a professional 3D graphics designer, you must care badly for the health of your graphics card (GPU) in order to maintain its peak level of performance under heavy workload without any kind of sacrifice or compromise.

Ultimately, the best way to achieve this is to keep your GPU as cool as possible, because heat is the number one enemy to all electronic devices, and the GPU is not an exception. And if you have a high-end graphics card, it’s too likely that your card generates massive heat during heavy workloads, and failing to properly and absolutely dissipate this heat means, in a nutshell, an apparent cut-down on the performance this graphics card is designed to offer.

Keeping the GPU at Low Temperature In order to lower the temperature of your GPU to the lowest level, you need first to get a high quality cooling system, something like Prolimatech MK-26 VGA Cooler alongside with a high performance thermal paste that works well enough to transfer the excessive heat from the GPU to the cooler heat-sink so as to get dispersed in the end of the its journey.

So, what thermal pastes do we recommend for this purpose?

Actually there are many good thermal pastes out there that can work great in this position, but if you are looking for the “best of the best“, then we can make two suggestions below.

Just note that these pastes are designed for CPU cooling in the first place, but they are the same ones used for GPU cooling as well. 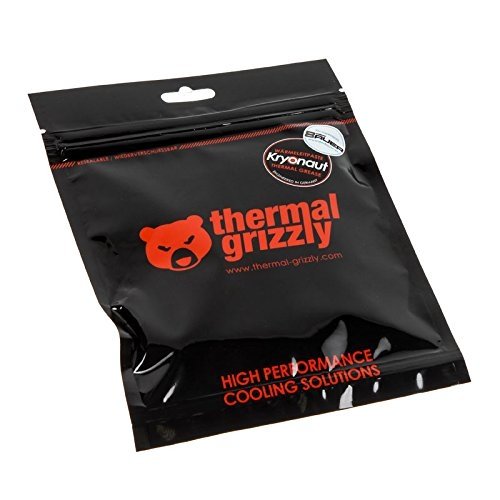 This thermal paste is currently the most popular among enthusiasts, and it occupies the top position of their choices as a high-end conventional paste. Thus, it’s our top pick for high-end GPU cooling systems.

Official Description: Thermal Grizzly Kryonaut Thermal Paste was specially developed for extremely demanding applications and the most demanding of Overlocking community. Kryonaut also recommended as a top product for critical cooling systems for industrial use.

Kryonaut uses a special support structure, with no drying processes and starts at 80 ° C. This support structure ensures that the contained nano-aluminum and tin oxide portions of the paste combine perfectly and so any unevenness of the heat output (eg the CPU) and a heat sink are optimally compensated with outstanding thermal conductivity.

After almost 6 years in lead of the market, GC-Extreme lost the battle against the new Kryonaut from Thermal Grizzly (talking about conventional paste)… Thermal Grizzly Kryonaut is the best normal paste on the market at the moment.
overclocking.guide (June 2015)

Thermal Grizzly is going up against some very tough competition, as there are a huge range of thermal pastes on the market to choose from and some of them have been proven and established for many years. Gelid GC Extreme is a popular choice for overclockers around the world, and we here at eTeknix have been using it for years in all our cooling tests, on our test benches and even in our own personal systems. I am happy to say that Grizzly is just that little bit better than GC Extreme, not so much so that I would feel compelled to take my cooler off and change my thermal paste, but close enough that you would find it’s a good alternative to GC Extreme.
eTeknix (May 2015) This great thermal paste comes second on our recommendation list for GPU cooling systems. The performance difference between it and the above one is marginal (Almost 2 degree difference only). So either pastes is a good choice, we believe.

GELID Solutions might not be as aggressive as other brands in terms of marketing, but there isn’t a senior enthusiasts that doesn’t knows the name GELID Solutions especially when it comes to PC cooling. Created for Extreme Users on highest level, the GC-Extreme thermal compound achieves excellent heat conductivity from your CPU, VGA or even Chipset to your cooler. The GELID applicator enables an easier application. The GC-Extreme has a very consistent performance comes a little more expensive than ordinary pastes, but still a worthy thermal compound to investment in if you’re looking for a good thermal compound with a solid performance. 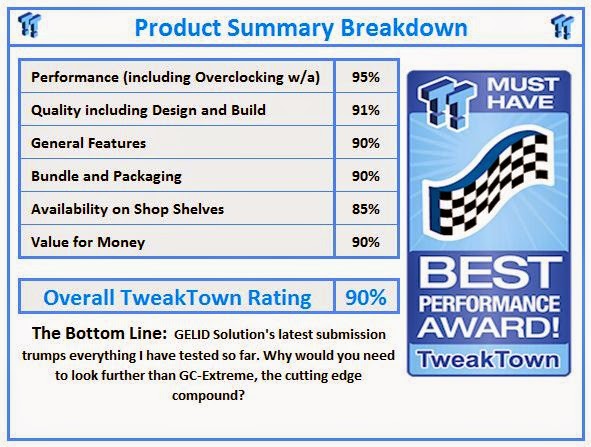 GC-Extreme is the best thermal paste in our round-up, maintaining a slim lead over the runner-up as long as you’re using a heat sink with high mounting pressure.
Tom’s Hardware (Oct 2013)

Taking a massive 18 degrees Celsius off the normal paste that comes with your Intel processor, and outperforming all of it’s competition, the GC-Extreme is what you’re looking for if you want the highest performing grease in the market. Being paired with the GELID applicator (an innovative, flexible piece of plastic), you should not have to look any further than GELID Solutions GC-Extreme when shopping for some new thermal compound.

I have used GELID Solutions GC-Extreme for the MSI Master Overclocking Arena EMEA Final. It workes very well with subzero temperatures and led us to win!

GELID’s GC-Extreme thermal compound is a clear winner, as it provides lower temperatures for the same price. It is clear that GELID Solutions keeps getting better and better in this game, and GC-Extreme is a clear proof of that. If you take the MSRP of $9.99 into consideration, GC-Extreme has a clear advantage over the competition and it clearly deserves our Recommended Award.

Opting for lowering the temperature of your graphics card and keeping the GPU as cool as possible is what an enthusiast is intuitively supposed to do in order to gain the utmost performance out of their card. Having a cutting-edge thermal paste to use for this purpose is strongly recommended, and it’s not something that a power user would forget.